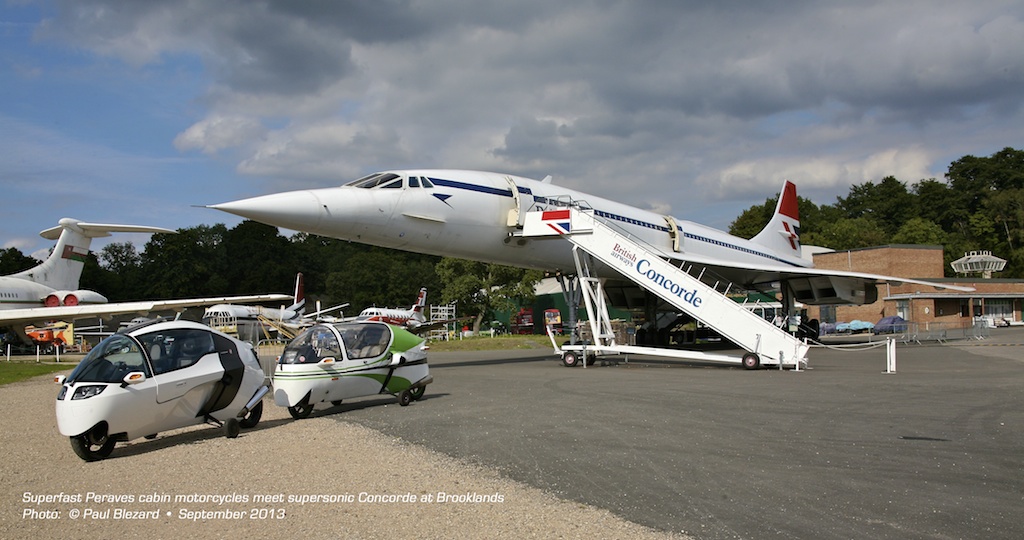 Many who see a MonoTracer for their first time have asked “Are you from the Future?”   One instagram photo captured by lilcflo has a caption which reads: “Welcome to the future folks!!” Another instagram by popstar_mini exclaims: “I don’t mean to alarm you, but George Jetson is on the 5 Southbound Freeway.”  In reality the concept of the cabin motorcycle is almost a century old.  One of the first cabin motorcycles debuted in the 1920s and was called the Monotrace.  The Monotrace was a cabriolet and was manufactured in France in the 1920s under licence from the original German manufacturer, EinspurAuto. ‘Einspur’ means ‘SingleTrack’ in German, and ‘Monotrace’ means the same in French. 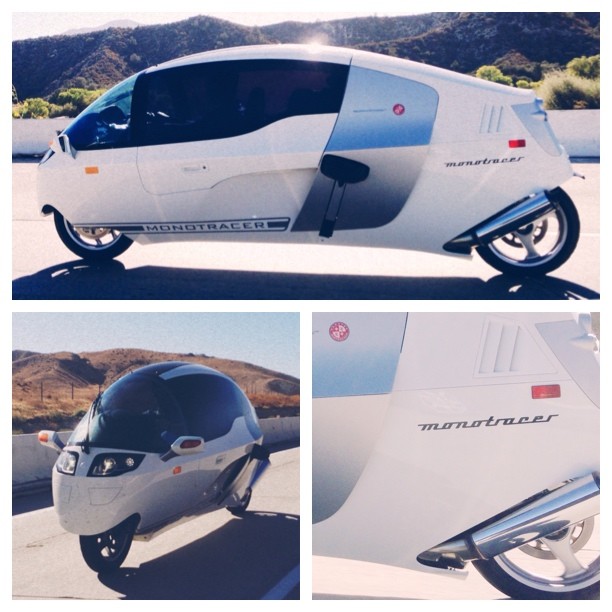 Instagram by lilcflo – Welcome to the future folks!! The Mono Tracer. Was in shock to finally see one on the road! 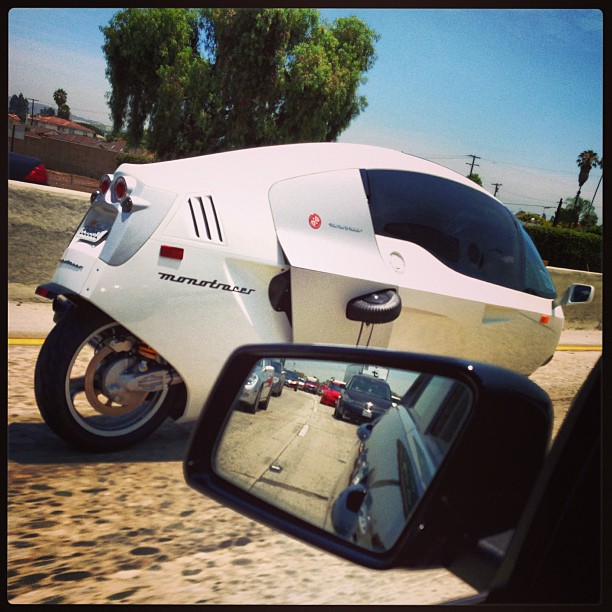 Instagram by popstar_mimi – I don’t mean to alarm you, but George Jetson is on the 5 Southbound Freeway #whatIsThatThing

In the 1930s a group of cabin motorcycles began to appear in eastern Europe called Dalniks – a sensible hybrid of an automobile and motorcycle.  The idea was to do more with less.  A half-sized car with only 2 main wheels was more affordable, used less materials to build, and was more efficient and thrifty on precious fuel.  All of these traits were important before and after WWII. 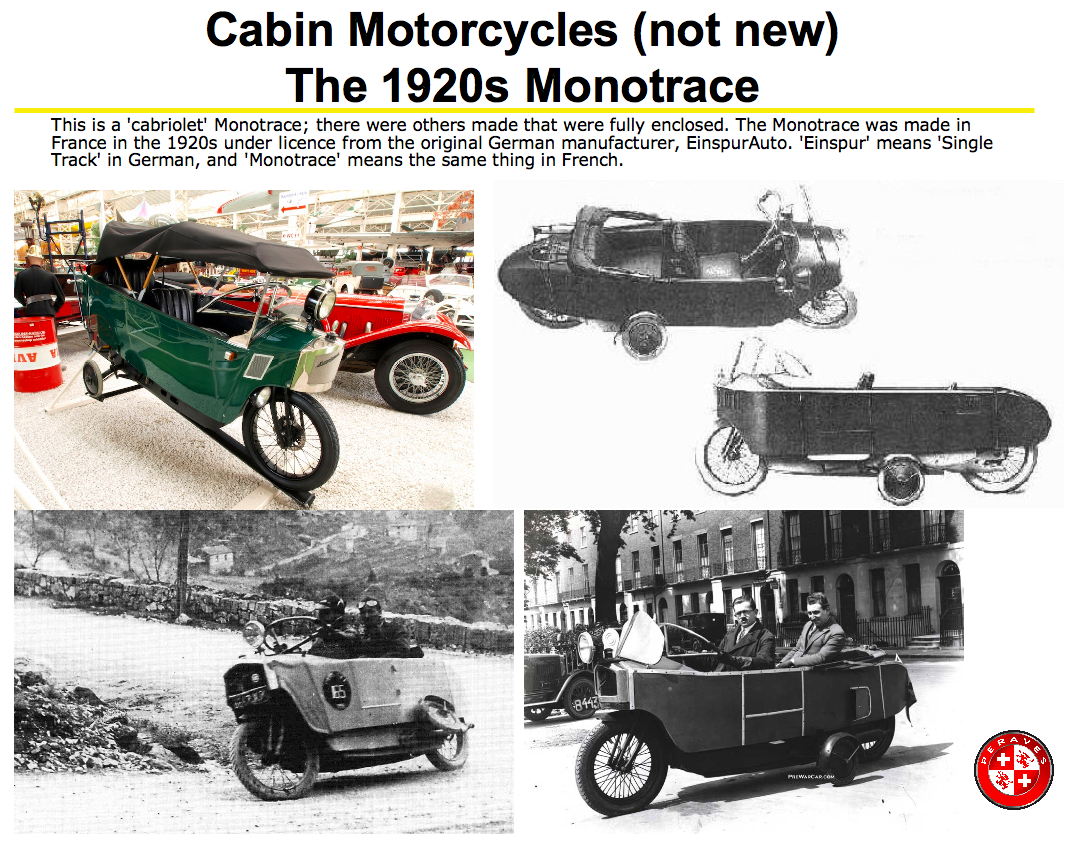 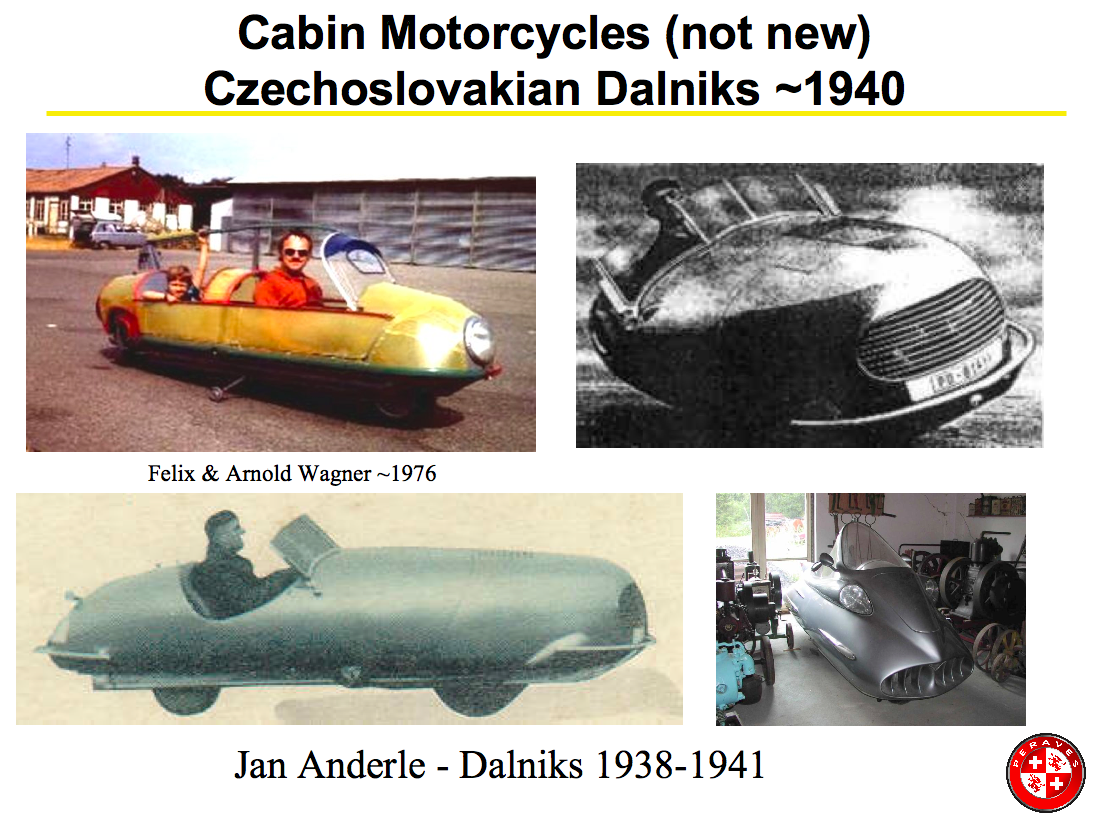 The recognized “father” of the Dalniks was Jan Anderlé, a brilliant Czech aeronautical engineer.  He began designing and building cabin motorcycles in the 1930s.  His innovative outrigger wheel system kept the vehicle upright when stopped.  Below is a brief “silent video” of Jan Anderlé’s 1941 Dalnik (with soundtrack added).  Jan demonstrates the controls, the outrigger stability system, starts the engine, goes for a drive showing how it cruised quickly and effortlessly, picking up his wife for a date at the end.

Via: Hedonia
“The term “dalnik” is unknown to most people, but they are a fascinating group of cabin motorcycles that have been constructed for the past 75 years, mostly in eastern Europe.(see the full Czech “Bohemiamobil” page here) Their design brief is a sensible one: a hybrid of motorcycle and automobile, with the virtues of both (at least in theory). The “golden age” of dalniks was during the 1950s and ’60s, and the former Czechoslovakia was its center. These vehicles almost always seated two in tandem, with a motorcycle engine mounted behind the passenger, and a streamlined body around them. Some had openable flaps for the feet of the driver, when at rest, others used outrigger wheels to prevent falling over when stopped. A very few experimented with gyroscopic stabilizers.

Anderle and his wife escaped to the West after the partitioning of Eastern Europe, but his wife persuaded him to return. Unfortunately, after they got back, he was arrested for treason and forced to work in the state uranium mines for the next 15 years. He spent much of the rest of his life in poverty and died in obscurity in 1982. Still, his influence over the vehicle type whose name he coined was immeasurable.”

You can read a little more history about the Czech Bohemiamobile here.  Click here for some history of Jan Anderlé and his Dálníks (English Google Translation – http://bit.ly/WHHxU1).  And Hedonia also has a good page covering the Dalniks.

In the 1970s, a Swiss airline pilot and aerobatic aircraft designer Arnold Wagner wanted a more efficient way to commute to work (consume less gasoline) while also staying warm and protected during the colder and wetter months of the year.  With his passion for motorcycling, he began researching the Dalniks (see above photo from 1976 of Arnold Wagner and son Felix in a Dalnik in Czechoslovakia).  In 1974 Arnold founded Peraves, which is latin and means “for the birds”, because there was another Swiss company at the time called Contraves (an anti-aircraft artillery manufacturer) which means “against the birds”.  With Peraves Arnold brought his love of flight to ground level while innovating the next generation cabin motorcycle.  He had the privilege and fortune of soaking up the decades of Dalnik expertise and knowledge from Jan Anderlé during Jan’s last couple of years before passing away in 1982.  He transferred that knowledge, and invented a modern fully enclosed high speed and high performance cabin motorcycle he called the EcoMobile (or Ecology Mobile). 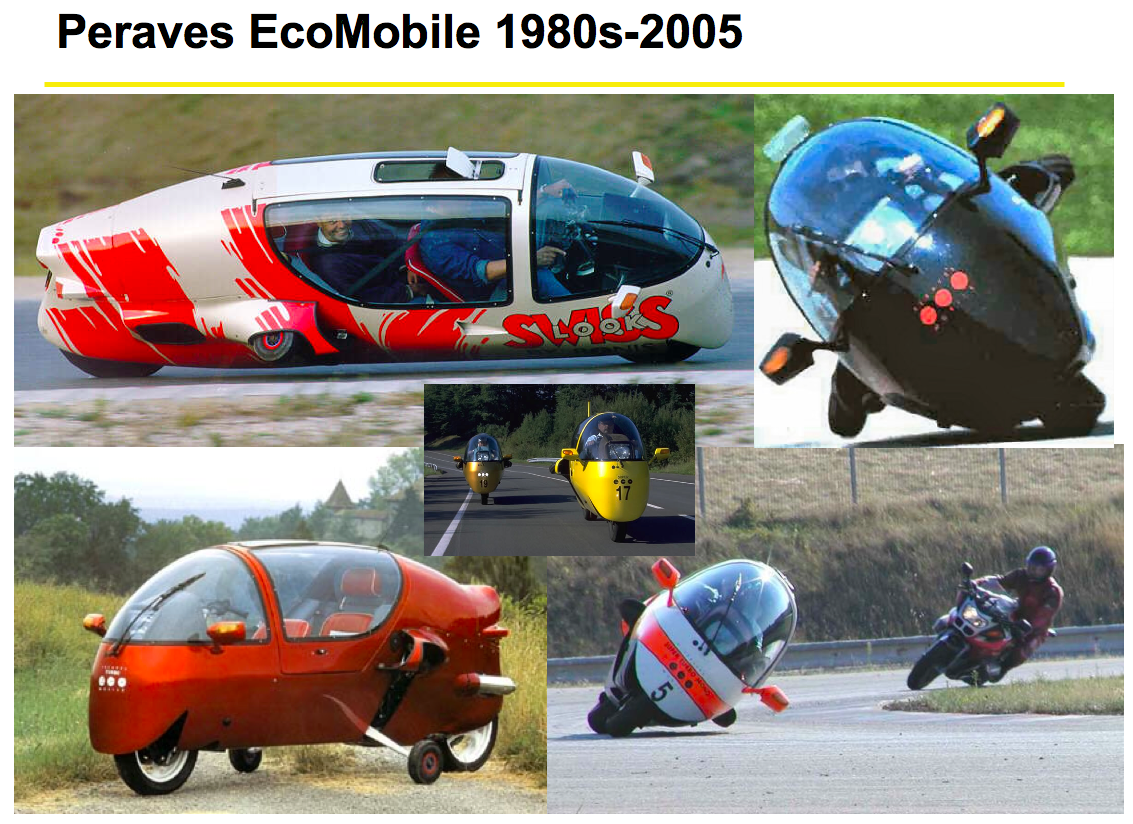 Arnold’s EcoMobile truly pioneered and catapulted the cabin motorcycle into the high performance realm while also realizing incredible fuel (energy) efficiency thanks to its very aerodynamic streamlined shape and small frontal area.  The longer wheelbase affords a more comfortable ride and provides seating for 2 and a 5cuft luggage compartment.  I’ll let the historic videos below do all the explaining.  Watch the wonderful and historic Discovery Channel “Invention” segment that aired back in 1991:

Another great historic video of the Peraves EcoMobile was the coverage by Discovery Channel’s “Beyond 2000” appearing in 1994:

And in 1996 BBC’s Jeremy Clarkson took a ride in an EcoMobile piloted by Mrs. Wagner:


Car or Motorbike? Jeremy Clarkson tries out the EcoMobile

Here is another rare and special 10 minute video about the first Ecomobile World Cup, in 1991, presented and narrated by longtime cabin motorcycle and feet forward fan Paul Blezard who had first learnt to ride an Ecomobile for a BBC TV Top Gear feature that he wrote and presented back in 1988. Paul was the first Briton and only the ninth person in the world to receive the JAV (Jan Anderlé Vereinigung)  certificate established by Arnold Wagner to ensure that people who wanted to ride cabin motorcycles on the public highway were competent to do so. Arnold himself was only No.3 after Jan Anderlé and fellow Czech Dalnik pioneer Karel Horak.

Lastly, yet another historic and well edited video gem, German coverage of Alpine riding in the Italian Dolomites with incredibly fast Peraves EcoMobiles from Sept 26-29, 1991 featuring an interview with a youthful Paul Blezard!  Notice how even back then the general public is astonished and excited at seeing their first cabin motorcycle be it the early EcoMobiles or MonoTracers of today.